Cambodia’s capital city is a sprawling metropolis, abuzz with scooters, tuk-tuks, and swish 4WDs. A study in contrasts, Phnom Penh has vibrant, colorful markets, which thrive alongside sleek new malls, designer boutiques, shuttered French villas, and Parisian-style cafés dating from Colonial times. The city is also an excellent springboard for visits to other parts of the country.

Due to its strategic position at the confluence of the Tonlé Sap and Mekong rivers, Phnom Penh became the capital of the Khmer Empire in the mid-15th century after it was relocated from Angkor. Phnom Penh, meaning Hill of Penh, derives its name from the legend of an old lady, Penh, who found four Buddha statues washed up on the shore of the Mekong River and set them on a hill. The city traded with Laos and China until the 17th century, when it was reduced to a buffer state between the warring Vietnamese and Thais. The Thais eventually razed the city in 1772. In 1863, Phnom Penh found itself under French rule, which lasted till 1953, when King Sihanouk finally declared independence.

Phnom Penh fell to Pol Pot’s black-clad forces on April 17, 1975; the city was emptied of its population, who were driven to the infamous Killing Fields of Choeung Ek. Cambodia was liberated by the Vietnamese in 1979 but it was another ten years before Phnom Penh was finally free to manage its own affairs. Having moved past the uncertainties of the 1980s, the city has reinvented itself with a growth in public works and considerable foreign aid.

Once known as the Pearl of the Orient, the capital is regaining some of its former luster, offering a selection of world-class boutique hotels and international cuisine. Local specialties include amok (fish cooked in coconut milk), kari (curry), and rice noodle soup. The atmospheric Sisowath Quay, which overlooks the Tonlé Sap River, harbors a wealth of French restaurants, bookshops, and stylish boutiques, as well as dozens of local eateries. Sights well worth a visit include the Royal Palace and Silver Pagoda, the National Museum, and the Tuol Sleng Genocide Museum. 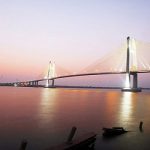 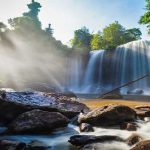