Phnom Penh’s riverfront is distinguished by its Gallic architecture – stucco-fronted, ocher-colored villas, and shuttered townhouses – while the surrounding area is home to many embassies, a number of old municipal buildings built under the French in the 19th and early 20th centuries, and several Chinese-style shophouses. The capital’s scenic riverside promenade, Sisowath Quay, is the hub of the city’s nightlife, with a variety of restaurants, lively bars, and boutiques. Other interesting places in the area include the Royal Palace and Silver Pagoda, the National Museum, and Psar Kandal, all within walking distance.

Royal Palace and Silver Pagoda Built in the mid-19th century with French assistance, the Royal Palace is home to the current mon- arch, King Norodom Sihamoni.  The adjoining Silver Pagoda houses the highly revered statue of the Emerald Buddha.

Owned by Cham Muslim silversmiths, who are noted for their fine filigree work, the silver shops sell exquisite belts, jewelry, betel pots, and other souvenirs.

The palace’s grounds and ornamental gardens are studded with stupas and statues of the royal family.

The FCC’s walls are adorned with atmospheric war photographs. Comfortable leather sofas line the walls of the elegant bar and restaurant, which offers excellent food and impeccable service. The views of the river from the club are spectacular.

The seat of Buddhism in Cambodia, Wat Ounalom has had a tragic history. Today, its attractions include a statue of its murdered religious leader, Samdech Huot Tat, and the stupa behind the main building, which contains a hair from the Buddha’s eyebrow

The four charming  terra-cotta-colored pavilions of the National  Museum house statuary ranging from Hindu deities  such as Ganesha, the elephant god, to pottery and  bronze statues

An enchanting area, Sisowath Quay is favored by visitors for its lively bars and the wide variety of international cuisine on offer. It also serves as a starting point for river festivals and boat cruises down the Tonlé Sap River. 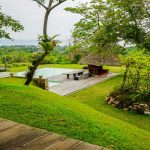 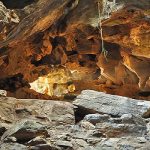